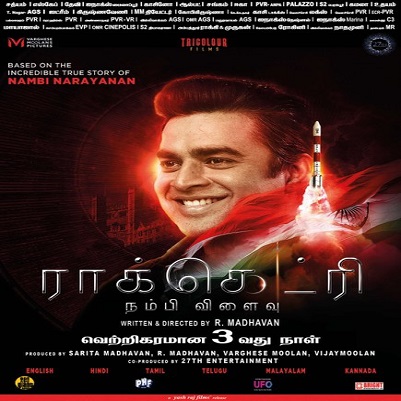 A must watch for every Indian by boths adults and children to understand the hard reality at worksometimes in the most unfortune fashion. Madvan brought the character to life without any artificial addons in process of making a hero.This film made the audience to travel to a spectacular journey of the scientist life both uphill and downhill.This movie is about the life history of ISRO scientist naminarayanan.this was written,directed,acted by Madavan .We all praised the success of ISROS marsmission.But we didn’t know/hear the ahrd times were there behind it this story revelaed some for those hard sometimes and tough times happened in nambi Narayan life.Directed made us to believe in the character. The story is about the Nambi Narayanan an aerospace engineer who worked as an isro scientist and who was falsely accused of espionage. This film documented about a man with passion and who dedicated his life to the advancement of science, a patriot who refused a well payed NASA job to back and serve his country.This man fought for 14 years with his wife and children a long,bitter battle  clear his name.The battel though a bitter path but the end was fruitful that he was innocent and the scam was just fabricated and baseless by supreme court. He was announced a compensation of 1 crore from kerala state govt.Recently he was been given the Indians 3 highest civilian award i.e Padma Bhushan by govt of India in 2019. This man was inspiration to many and the story in itself is a bliss to watch.